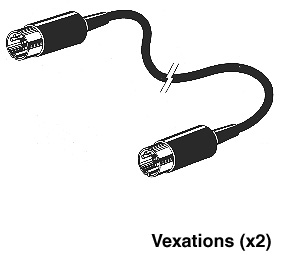 A late post, but still worth of mentioning and documenting; we organized a special nine hour experimental music evening at Café Kiasma exactly one week ago (12.10.2012). The event was based on Erik Satie’s Vexations composition, but every artist used only the MIDI data of the composition, each with their own methods. I think it was a pretty successful evening all and all, and I think I’ll continue with the MIDI investigation.

Here is the more in-depth text about the event:

AROUND 1893, Erik Satie composed a piece called Vexations. Consisting of swaying notes and chords, the piece lasts only a few minutes, but at the bottom of the sheet Satie included a mysterious and perhaps humorous instruction: “To be repeated 840 times”. Although Satie himself apparently never performed the piece, it has since then been performed several times. The first and perhaps the most famous of the performances was the eighteen-hour session organized by John Cage in 1963.

The Whitecolors collective and Kiasma give a contemporary feel to Satie’s composition. Twelve experimental musicians will use a MIDI score of Vexations playing at double speed on their own electronic devices or computers, or use the visuality of the MIDI notes in some totally different way. The idea is to create a series of different performances that will all nevertheless have the same starting point.

Lasting throughout the day, the event also reflects Satie’s concept of ‘furniture music’ (musique d’ameublement) that sees music as an inseparable part of the environment.

Whitecolors is an open collective specialising in site-specific works and concerts. Its first project was a 24-hour Dream House concert dedicated to the composer La Monte Young, held on the island of Harakka off Helsinki in June 2011 in co-operation with the Nomadic Academy of Experimental Arts.